Reddish-brown Giant Pacific Octopuses live (you guessed it!) in the Pacific Ocean, and have been found everywhere from Japan to Alaska and Mexico. They are the largest octopus’ species alive, averaging around 12 feet long and weighing 50lbs or more, and have the longest lifespan.

Octopuses are cephalopods, related to cuttlefish and squid, meaning that their arms (not tentacles, as many people are led to believe!) are attached directly to the head. Let’s take a look at what makes the Giant Pacific Octopus so special. 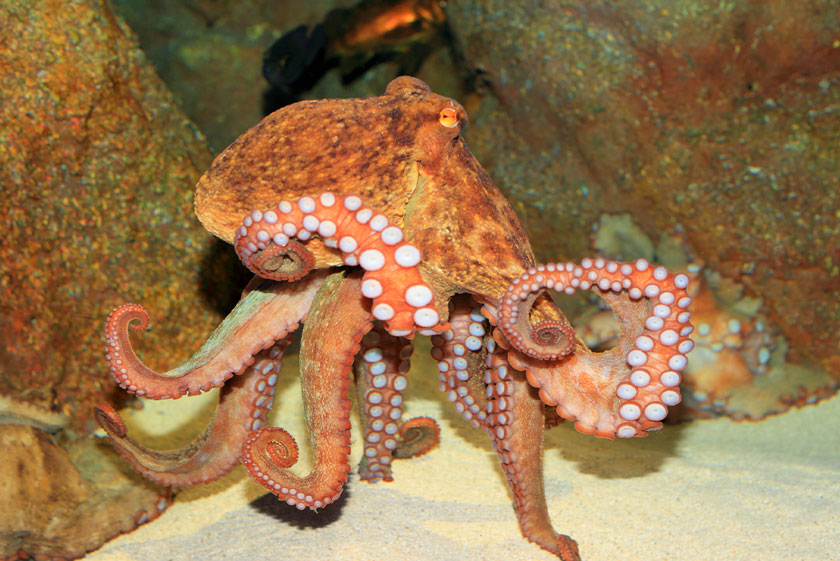 1. Giant Pacific Octopuses give their all to have their young

A Giant Pacific Octopus will spend its whole adult life on its own, right up until they are ready to reproduce at the end of their lives.

A female will select a large male to mate with, storing his sperm for up to several months until she is ready for her eggs to be fertilized. She will then lay anywhere from 18,000 to 74,000 eggs in a den and will protect them for 6-7 months until the eggs are ready to hatch.

The female Giant Pacific Octopus is such a dedicated mother that she will never leave her eggs, not even to find food. Unfortunately, this means that, once her eggs have hatched, she’ll die of starvation and exhaustion. 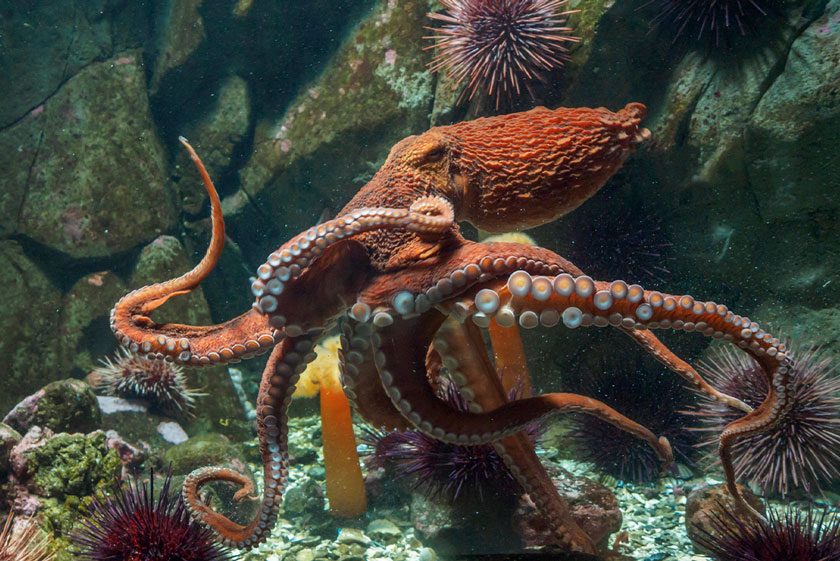 Like all octopuses, Giant Pacific Octopuses are exceptionally intelligent. They can solve mazes, open jars, escape enclosures, and even recognize faces. They are also known to play with toys in captivity and are the only invertebrates that are known to exhibit this kind of behavior.

Without a hard shell to protect them, Giant Pacific Octopuses need another way to protect themselves from predators. They do this by changing color based on their surroundings. This camouflage, along with the ability to squeeze into small spaces, is very effective at keeping them well hidden from predators.

Besides this camouflage, Giant Pacific Octopuses also have an ink sack they can release if they feel trapped or seriously threatened. This ink is highly toxic, even to the octopuses themselves if they are unable to escape a small space they’ve released the ink into. 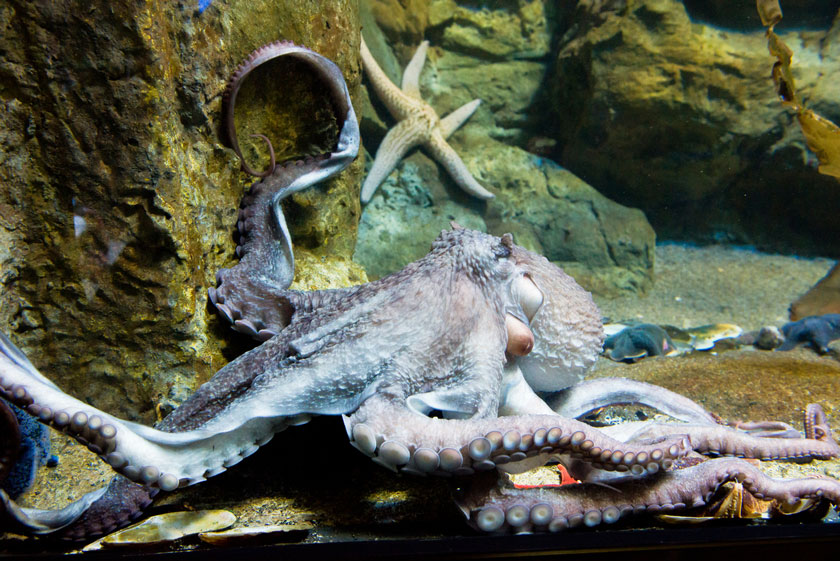 The suction cups on the Giant Pacific Octopus’ eight arms aren’t just a useful alternative to fingers for holding onto things. The females have around 2,240 suction cups in total, whereas males have about 2,140. These muscular structures give the octopus a powerful grip along with a great sense of taste and smell. In fact, a single suction cup contains more taste receptors than a human tongue and the largest ones can lift up to 35lbs!

Most of the octopus’ neurons are located within the arms, allowing each suction cup to be individually controlled, rotating, gripping, and feeling its way along the ocean floor. Additionally, each arm has its own “mini-brain” allowing them to move independently but also work as a united group. 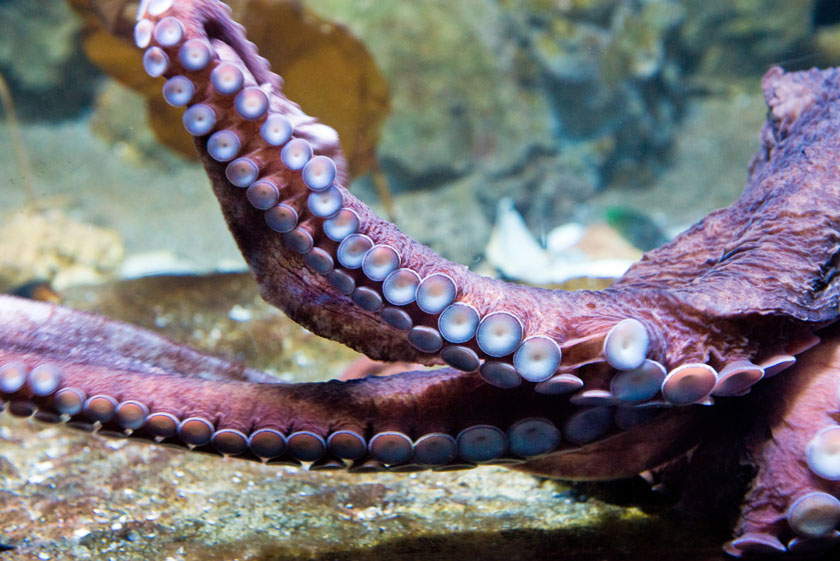 As with other cephalopods, Giant Pacific Octopuses swim through the water headfirst, giving the appearance that is it doing a kind of backstroke. It does this by filling its mantle with water and then contracting its muscles to create a narrow opening known as a siphon. Water is forced through this siphon and the octopus is propelled through the water, much like jet propulsion. 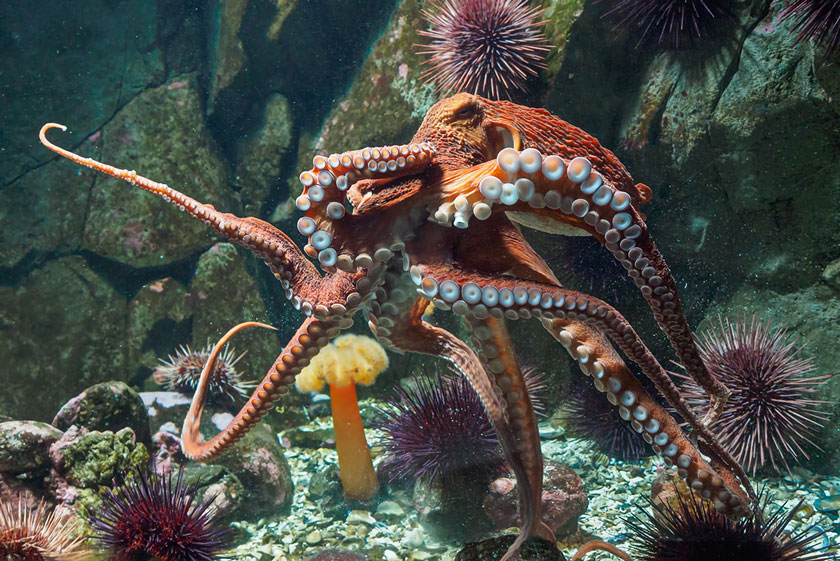 So there you go! 5+ fascinating facts you now know about our intelligent 6-armed underwater friends.