The beloved Steven Spielberg film, E.T., was released in 1982. Fast forward to July 9, 2020, when the National Oceanic and Atmospheric Administration Office of Exploration and Research, NOAA, announced that a deep-sea team discovered a new type of sponge that resembles the alien known as E.T. This ‘alien-like’ creature was found growing in an area of the Pacific seafloor that dates as far back as 145 million years ago! Known as the “Forest of the Weird”, this extraordinary seascape is over 7,800 ft. below the surface – where strange looking creatures appeared to be growing from the rocky seafloor.

NOAA OFFICE OF EXPLORATION AND RESEARCH.

One of the strange looking creatures is now known as the “E.T. Sponge”, thanks to its body rising high on a stalk with two larges holes reminiscent of the eyes of E.T. It’s a new species and genus of a glass sponge… animals that typically attach themselves to hard surfaces, where they feast on small bacteria and plankton.

The first reported sighting of the glass sponge was in 2016, and credit for the find is going to scientist Cristiana Castello Branco, a postdoctoral researcher who analyzed a specimen’s skeleton and realized it was unknown to science. She officially named it Advhena magnifica (magnificent alien) but everyone is calling it the “E.T. sponge.” And for good reason! 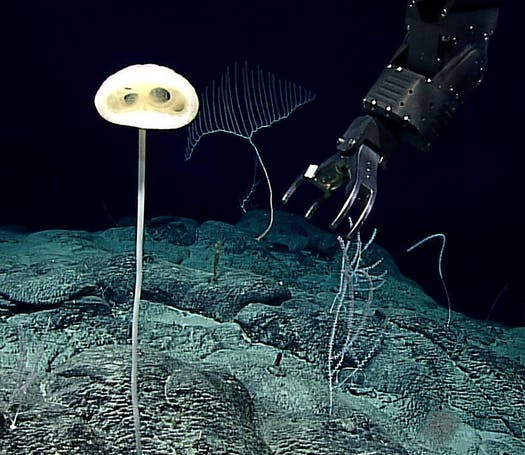 NOAA, DEEPWATER EXPLORATION OF THE MARIANAS