There are so many weird and wonderful creatures to be found in our oceans all over the world, and one of our favorites is the beautiful seahorse. There are now 47 known species of seahorse, found in both tropical and temperate waters, calling seagrass beds, mangrove forests, and coral reefs home.

Seahorses are fascinating creatures, able to camouflage themselves to look just like sea flora so they aren’t eaten by predators. There are so many things to learn about seahorses, but here are just 5 of the most interesting facts you need to know about them. 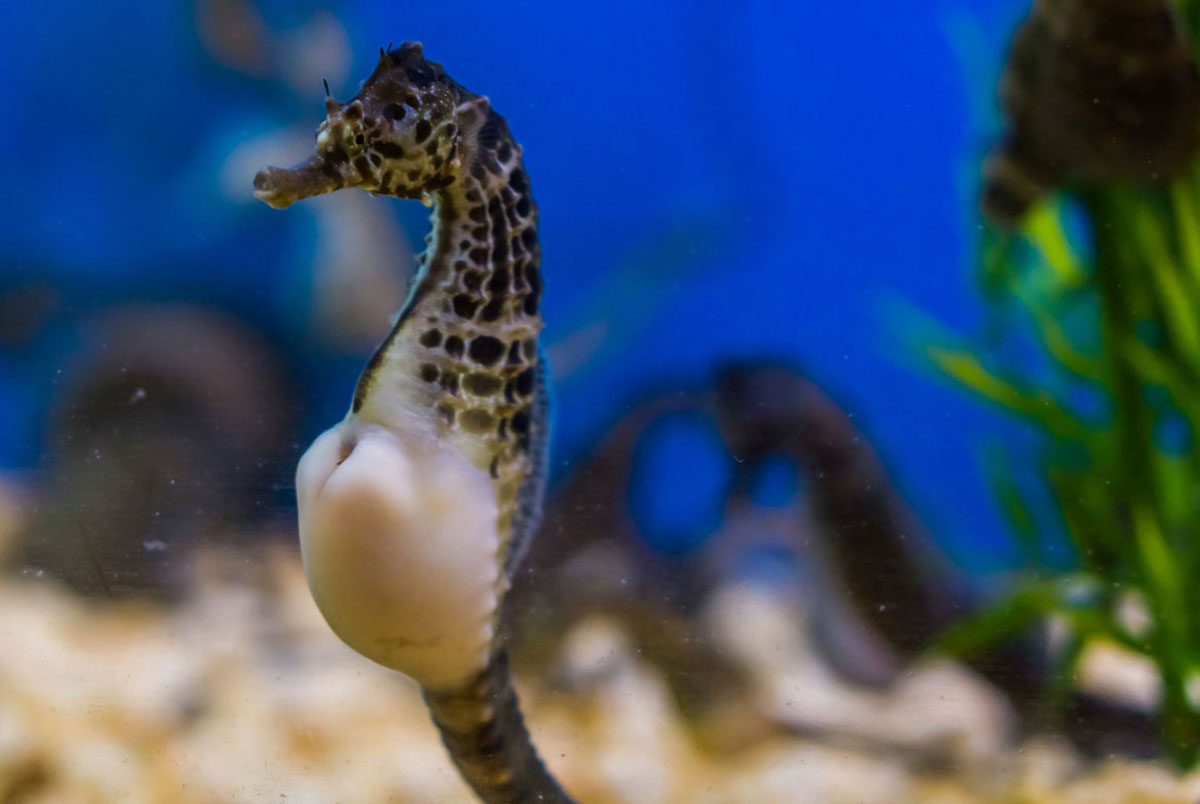 If you know anything about seahorses, this is probably the fact you know: it is male seahorses that go through pregnancy! Along with the closely related sea dragon (yes, that’s a real thing!), they are the only species on Earth that do this.

With the male bearing the young, the female seahorse can continue making eggs so that she will be ready to reproduce as soon as the previous babies have been released by the male.

Seahorses mate for life, finding their mate through a courtship dance that lasts for a whopping 8 hours, swimming alongside one another, spinning around, and changing colors.

The female then releases up to 50 eggs into the male’s pouch, found on the abdomen. The eggs will be carried until they are ready to hatch, releasing anywhere from 5 to 1,500 fully formed, minute seahorses – that’s a lot of babies! 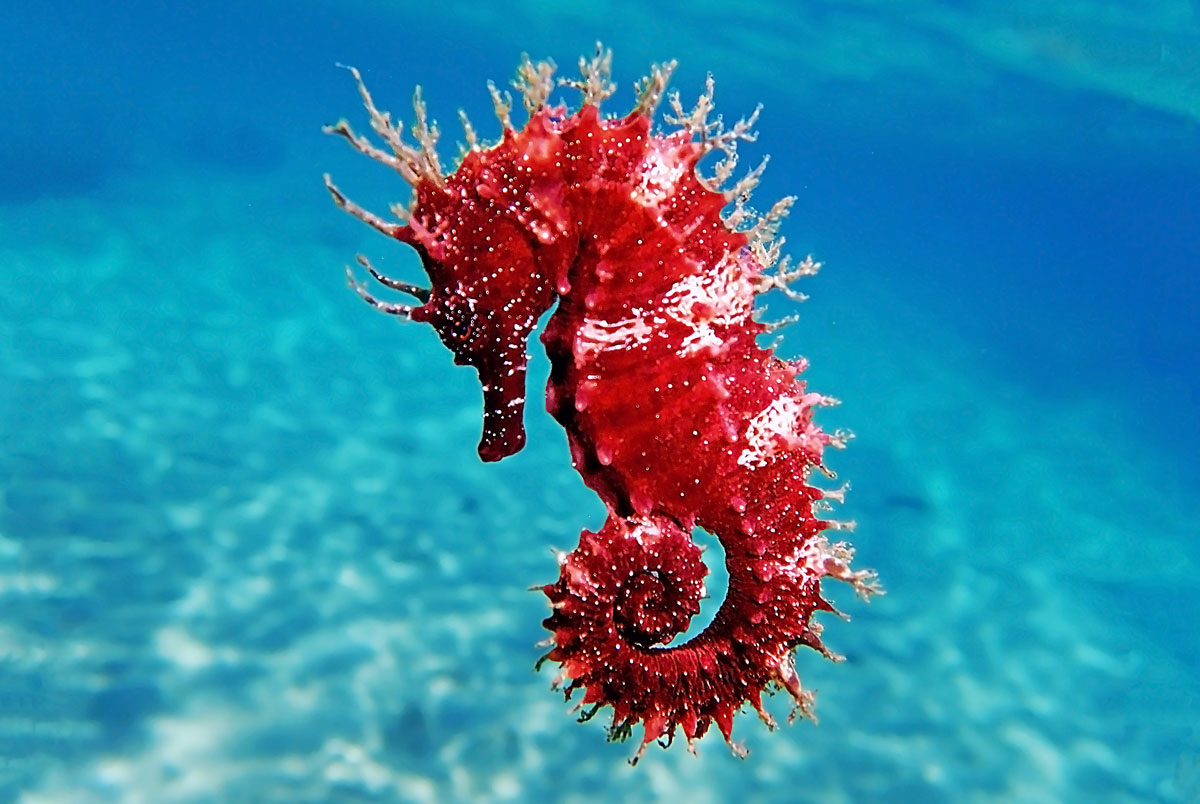 Seahorses can avoid predators by changing color, camouflaging themselves against underwater plants. Typically animals that have a lot of babies at once are those that are heavily preyed on, however in the case of seahorses, they’re lucky to actually have very few predators. In fact, it is only some species of crab who are happy to digest the hard, bony exoskeleton.

A seahorse is also able to move its eyes independently from one another so that it can keep an eye on predators, and prey, without making itself known. 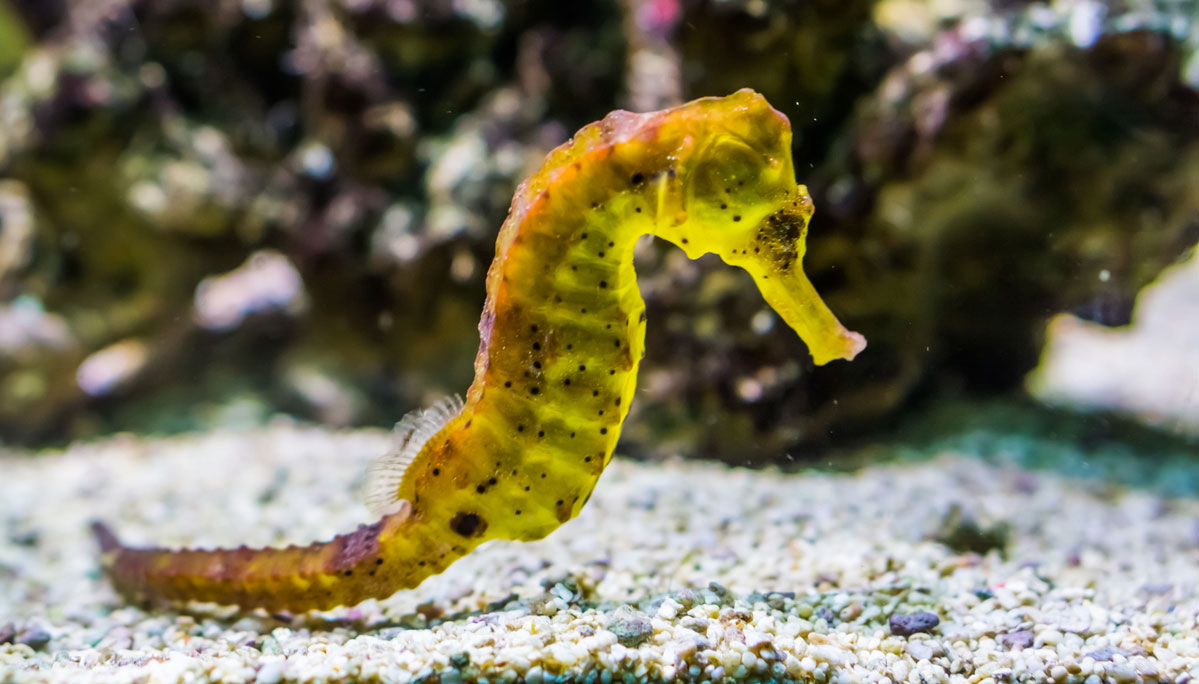 #3: Seahorses move with a propellor

The way seahorses move around the ocean is much like a boat. They have a small fin on their back that flaps at a rate of 35 times per second, propelling themselves through the water. Then, they use tiny pectoral fins on the back of their heads to steer, just like moving a motorboat! 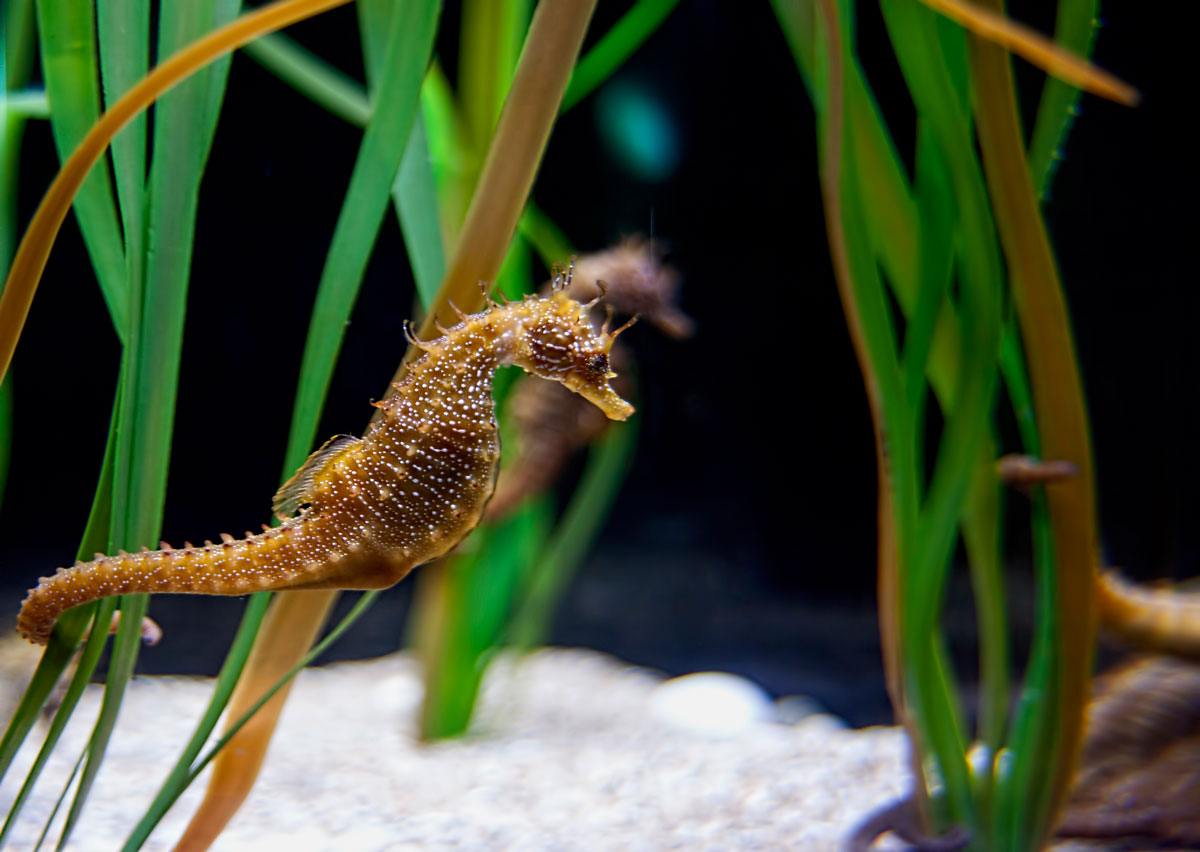 Seahorses can suck up food, such as plankton and shrimp, with their extended snouts from up to 3cm away.

Seahorses don’t have teeth or a stomach, and so due to the speed that food passes through their body, a seahorse must feed constantly to ensure they get all the nutrients they need to survive. In fact, some species of seahorse can ingest more than 3,000 brine shrimp every single day. 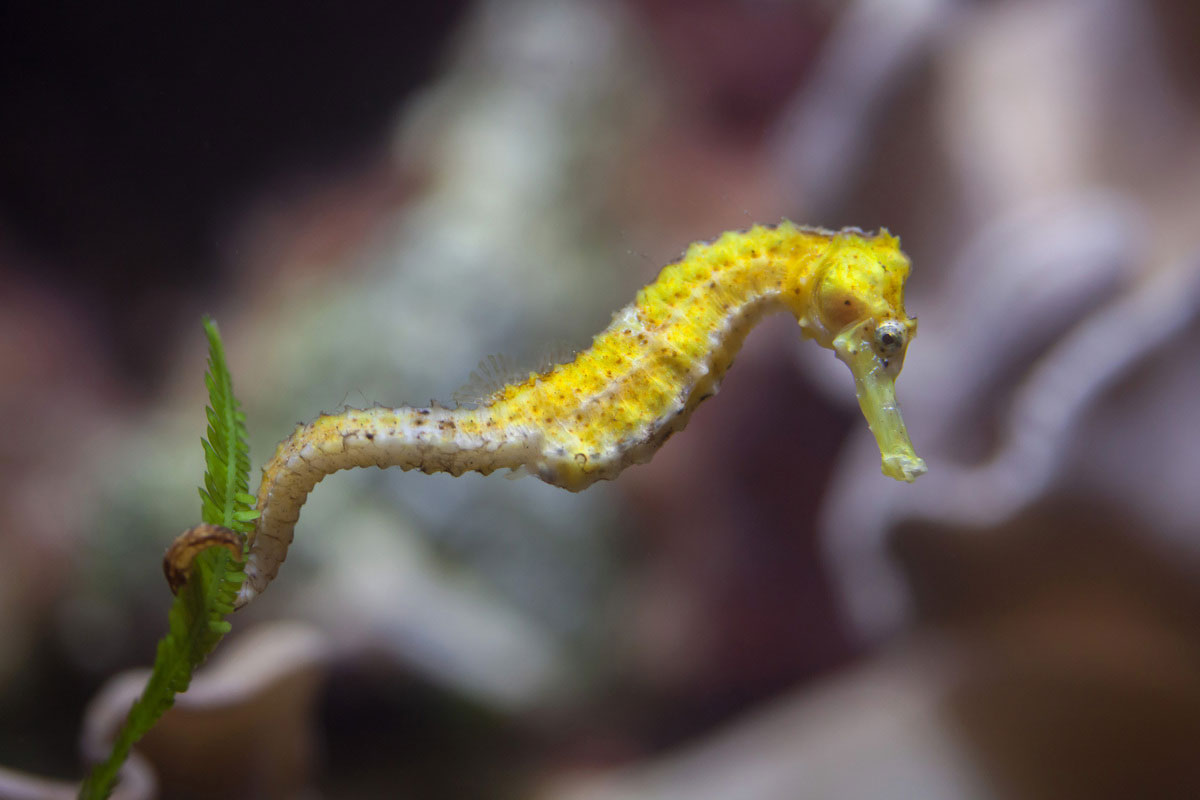 #5: Seahorses use their tails as a tool

A seahorse’s tail is a very useful tool. Not only do they use it to anchor themselves to sea vegetation and coral, but they can also use it as a weapon to fight for food and territory.

Once paired, they will also link tails with their mate to swim around together, just like holding hands!

Like most marine species, seahorses are threatened by harmful plastics entering their ecosystem. Plastics cover the seabed and push the seahorses out of their habitats. Tiny microplastics can also be mistaken for prey and they are inadvertently ingested by seahorses, causing them harm.

When you play Free the Ocean trivia, or buy plastic-free products from the FTO shop, you’re helping protect our wonderful oceans and everything that calls them home… including seahorses! 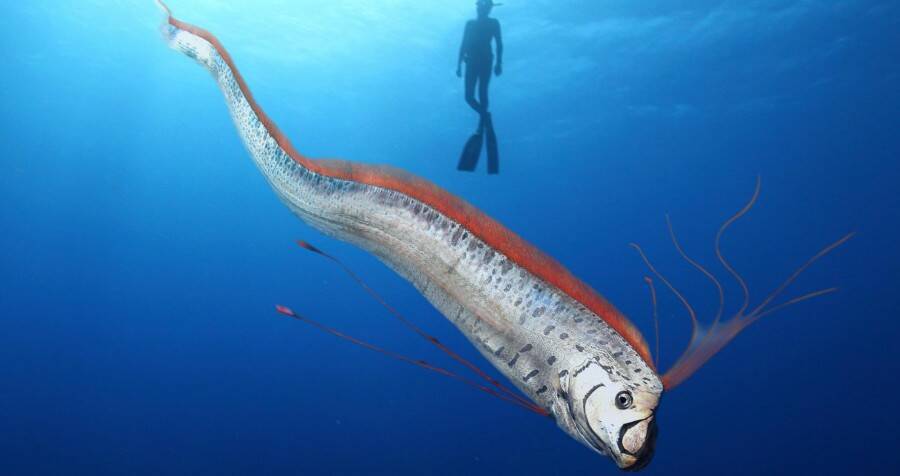 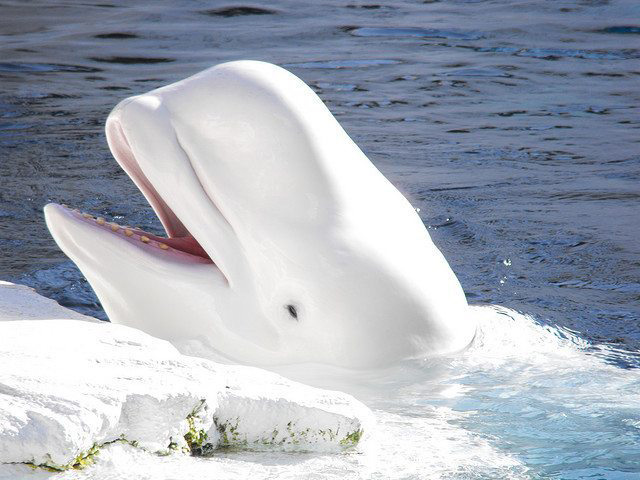 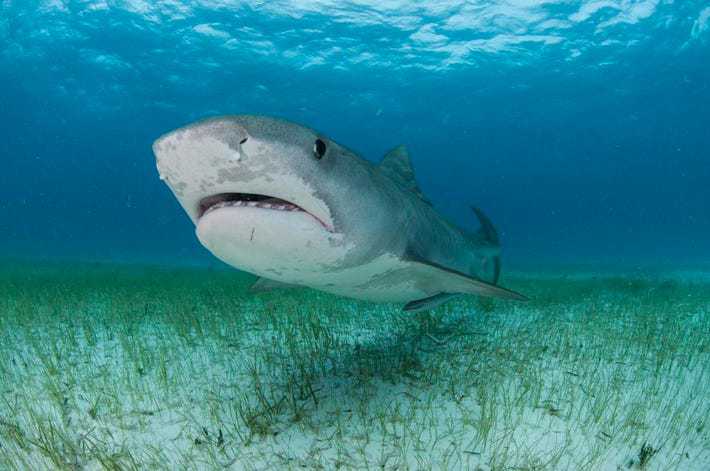